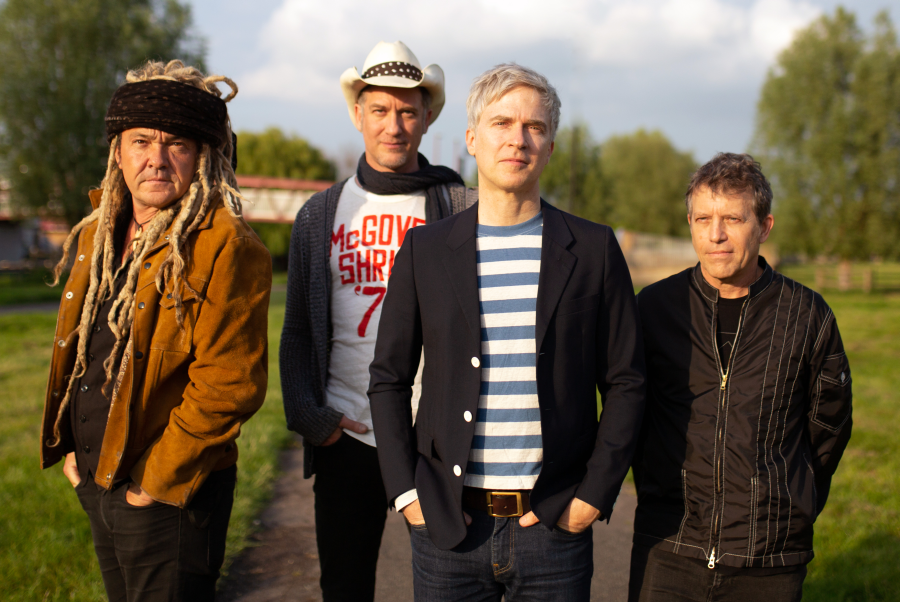 Tickets for the original June 7 show will be good at the door!

With their ninth studio album, Nada Surf -- Matthew Caws, Daniel Lorca, Ira Elliot, and their longtime friend and collaborator Louie Lino -- continue pursuing their humanistic vision of the world through hooky, catchy rock songs with sharply drawn, yet tenderly felt lyrics. Never Not Together, out on TK DATE, is a wide-ranging collection of songs that revel in the group's ability to evoke and reflect grand and intricately wrought emotions, whether through sweeping guitar solos or hushed-whisper vocals.

"Empathy is good, lack of empathy is bad, holy math says we're never not together," Caws declares at the end of "Something I Should Do," a crashing power-pop track with an insistent melody that adds urgency to his thoughts about 21st-century life. The concept of "holy math" which informs that line -- and the album's title -- was inspired by a Justin Vernon appearance on the Song Exploder podcast, where the Bon Iver leader talked about the interconnectedness of humans. "We're all together, and that's just the way it is, and the way it always will be," says Caws. "That's the sacred truth of it."

That idea of being linked and searching for connection is a common theme of the album's lyrics, which depict people hunting down answers by peering within and reaching outward. "Looking For You," which opens with a spectral choir and blossoms into a rock spectacle with crashing strings and two guitar solos -- one played by Caws, the other by frequent Nada Surf collaborator Doug Gillard -- seeks solace in doctor's visits and grand metaphors. "So Much Love," which Caws wrote as part of Hits president Karen Glauber's annual SXSW session, is a driving, yet kind-hearted reminder that love and connection are in the air -- even if, in the immediate, it's lurking in the mists of one's sent-messages mailbox. "Mathilda," meanwhile, shifts time signatures as it switches perspectives on a childhood spent apart from the crowd, mulling over what "masculinity" meant even at a young age.

Youth is also a topic on "Just Wait," a shimmering midtempo song tethered to earth by a fluid bassline. "I wrote 'Just Wait' on a writing trip to Nashville," recalls Caws. During a session with songwriter Gavin Slate, the two got to talking about the current state of youth culture. "I remember how being an adolescent was so scary -- just as it would be for everybody," he says. "You're starting to feel like an adult, but you kind of don't want to be; you're kind of not ready, but you kind of can't wait. It's that kind of fright-delight, like September at school." The end result is empathic and warm, its chiming guitars and background "ooh-oohs" offering a refuge from the pressure to keep up appearances in "love and work and where you live," as Caws sings on the song's bridge.

In 2017, Nada Surf celebrated the 15th anniversary of their 2002 breakthrough Let Go, an experience that energized the early planning of Never Not Together. "I made pretty elaborate demos for the songs -- something I've never done before," says Caws. "I think [the Let Go tour] really boosted my work ethic and made me feel like I really had to go for it."

Never Not Together was recorded at Rockfield Studios in Wales, where artists like Echo & the Bunnymen, the Flamin' Groovies, Iggy Pop and Oasis recorded albums. "I've been seeing the name on albums for so long," says Caws. "It's a working farm, and the founder/owner, Kingsley Ward, would come in and tell us stories when he wasn't farming. I'd walk into town every morning and listen to the sheep talking as I walked by them."

That openness to listening -- to their fans, to each other, to the world -- has helped inform Nada Surf's legacy as down-to-earth rock stars -- musicians who can command festival stages around the world while connecting to audience members on a personal level, conscious of the shared humanity every step of the way. 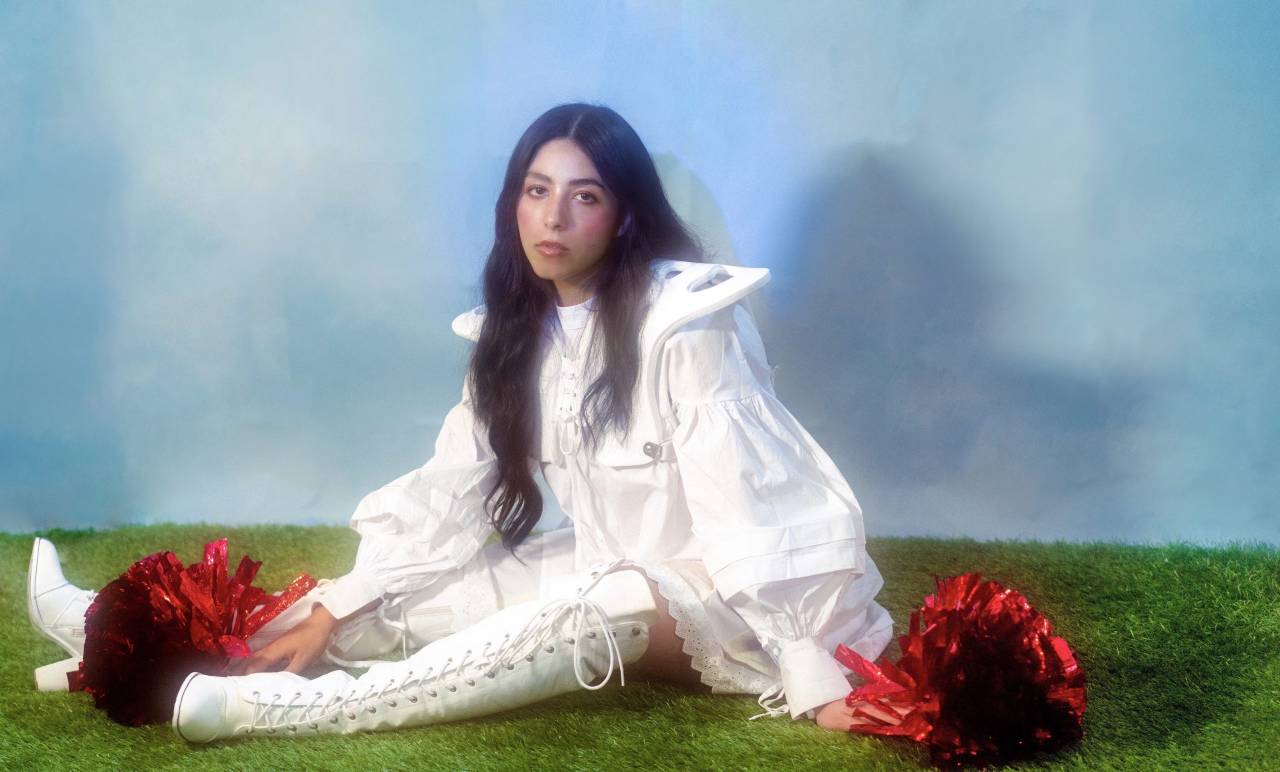 When Pom Pom Squad's Mia Berrin was 21 years old, she fell in love. Sure, she'd been in love before, but this time, something was different: "It just felt like a switch had flipped inside my head," she says. "I realized I had been living a life that was not my own, watching myself from the outside." As a kid who bounced from town to town growing up, and as a person of color in predominantly white spaces, Berrin had become accustomed to maintaining a constant awareness of how others perceived her—a "split-brain mentality" that she adopted as a necessary means of survival. But now, tumbling through her first queer romance—and her first queer heartbreak—some of that self-separateness began to mend: "Suddenly," she says, "I was in a body that was mine."

Of course, displacement can start to feel like a life sentence when even the pop culture you're trying to escape into doesn't feel like home. "As a teenager, I was always looking to see myself represented," Berrin says, "but I never really saw a path drawn out for someone who looked like me." So she held tight to the glimpses of herself she could catch—from Death Cab For Cutie to Sade; from the camp and synth-pop of Heathers to the pastels and gloomy mellotron of The Virgin Suicides; from John Waters's take on suburbia to David Lynch's. "I absorbed everything I could and tried to make a collage that could incorporate every piece of me," she says—and in the process, she gained a particular appreciation for the heady mix of music and visuals, how a great song could become even greater when woven into an artist's overall aesthetic. But it wasn't until Berrin got into punk and grunge—artists like Courtney Love and Kathleen Hanna, who were both unapologetically outspoken and unapologetically femme—that she knew she had to start a band.

Enter Pom Pom Squad. Berrin first played under the moniker in 2015 after moving to New York to study acting at NYU—though she soon transferred to the Clive Davis Institute of Recorded Music—and it was at those early gigs that she linked up with Shelby Keller (drums), Mari Alé Figeman (bass), and Alex Mercuri (guitar). The group cut their teeth playing packed Brooklyn apartments, but they quickly graduated to packed Brooklyn venues alongside artists like Soccer Mommy, Adult Mom, and Pronoun. Following the release of their sophomore EP Ow, Pom Pom Squad was looking at a packed 2020, with shows at SXSW and opening for The Front Bottoms—but of course, plans changed.

Lost in the free-fall of isolation, Berrin found herself returning to classic, familiar sounds: jazz vocalists like Billie Holiday, the warm tones of MoTown. "It was comforting, listening to music that's so evocative and cinematic," she says. "It takes you out of the world for a minute." At the same time, though, she was confronted daily with the world's stark reality as protests erupted against police brutality and anti-black racism following the murder of George Floyd. "[The protests] brought to the surface these feelings I'd been stewing on for a long time," she says, "thinking about the history of American popular music, the way that black artists are constantly erased from the music they pioneered. How rock was invented by a black queer woman—Sister Rosetta Tharpe—but I grew up feeling like I was odd for loving guitar-based music."

The result of this stymying, galvanizing period—of escaping to come back—is Death of a Cheerleader. Produced Sarah Tudzin of Illuminati Hotties and co-produced by Berrin, the album moves through moods like a camera panning across an expertly collaged bedroom wall: a Ronettes drum beat here ("Head Cheerleader"), a Doris Day nod there ("This Couldn't Happen"), the impossible romance of swelling strings ("Crying") collapsing into guitar thrash ("Drunk Voicemail"). Here, too, are all the overlapping, contradictory tenets of 21st-century young womanhood—the carnality and the vulnerability, the sugar and the defiance. On "Head Cheerleader," antsy and anthemic, Berrin promises us that "my worst decisions are the ones I like the best" before she heads under the bleachers, even as she acknowledges moments later that "my feelings always make a fucking fool of me"; on the breathless, punky "Lux" (named for the Virgin Suicides heroine, of course), she boasts feeling "naked without taking off any of my clothes," and it's as much a come-on as it is an admission of terrifying exposure, couched in Berrin's dare-laden drawl.

This tension—between baring oneself and crafting delicious, tongue-in-cheek art—is what drives so much of the foundational queer media to which Death of a Cheerleader pays homage (not in the least its film namesake, But I'm a Cheerleader). On "Second That," a tumbling acoustic waltz built around a Smokey Robinson quote, Berrin steps out for a moment from behind the elaborate curtain of references she's constructed with an admission—"I'm sad, I'm just fucking sad," her voice on the edge of breaking—but then, moments later, she's back in the anti-bourgeoisie upswing of "Cake," playfully demanding her fair share. It's a reminder of the self-affirming power of artifice, of glam, lipstick drawn on in blood. With Death of a Cheerleader, Pom Pom Squad offer a fresh and decidedly queer take on picking up the pieces—from heartbreak, from injustice—and creating yourself anew.